So, my MAC delivery came today, and I am SO excited!! I only ordered it Sunday, and it’s now Tuesday, so I am impressed! I’ve also given mum a shopping list for MAC as she is in Chicago at the moment, so another haul arriving home tomorrow! Yay!

So, in my order, I received two matte blushes, 4 eye shadows, a palette to put them in and the Studio Fix powder plus foundation! I’ll break it down for  y’all.

So after watching a million MAC haul youtube videos over the weekend, and seeing this product in almost every one of them, I just had to get it. MAC’s studio fix powder plus foundation comes in the black packaging, the powder part lifts up to reveal a sponge, but I prefer to apply powders with a brush, otherwise I feel too cakey y’know? I got the shade NW20, a bit of a guess around the fact that I’m NW20 in the pro longwear concealer and NW15 in the pro longwear foundation. Turns out to be the perfect shade! I wore it today over my MAC foundation and concealer, I planned to use it just as more of a setting powder and a touch more coverage. It feels amazing, doesn’t get cakey, and holds the shine at bay Yay!

The next thing I got, which I was super excited about was four of MAC’s eye shadows, pans only, as they were £5 cheaper each. Because of this, I also bought the palette. It cost £5 for the four shadow holder. I think they do them up to 15 shadows. But I just think this looks so cute and professional, and takes up less space than individual containers. The top two are in shades “Swiss Chocolate” and “Sable.” The bottom two are “Goldmine” and “Nylon.” I picked these shades from watching the haul videos too! I’ll show the swatches below, without flash on the left and with flash on the right: 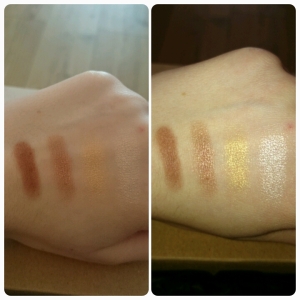 They are all really, super pigmented! “Swiss Chocolate” is so so pretty, it’s a matte shade. I have been after “Sable” for a while, I used this in my crease today, it can be applied with a light hand to get a shadow, or layered up for more of a statement. I figured everyone needs a gold shadow in their life, so I went for “Goldmine.” It is so so pretty! I haven’t tried this on yet, and will do a more in depth review on these four once I’ve tried a few looks. The last one is “Nylon.” Again, someone doing a haul video told me I needed it, so who was I to argue?! I used Nylon as a base today, it makes for a good highlighter in the corners of the eyes. I also tried it on the top of my cheekbones as a highlighter, and it worked pretty well! Dual use, always good! 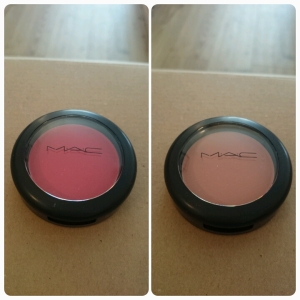 The last two products I purchased were two of MAC’s matte blushes. The first one I was dying to get my hands on was “Frankly Scarlet” on the left. I didn’t use this one today, but a review will be up shortly, because I am just in love with this colour! The second shade I got was “Melba.” I thought this shade was going to be ok, I didn’t expect it to be bloody amazing! I don’t know if it’s my skin tone, or what, but it looked so good! I got so many compliments, people noticing something different about my makeup. My new HG blush!

That’s about it for now. I’ve got top ups of my foundation and concealer coming from good old mum, but I’ve also got MAC’s lip primer and also their lipstick in the shade “Brave,” which I’m super excited to try! So y’all will hear from me soon!

View all posts by Skincare life.